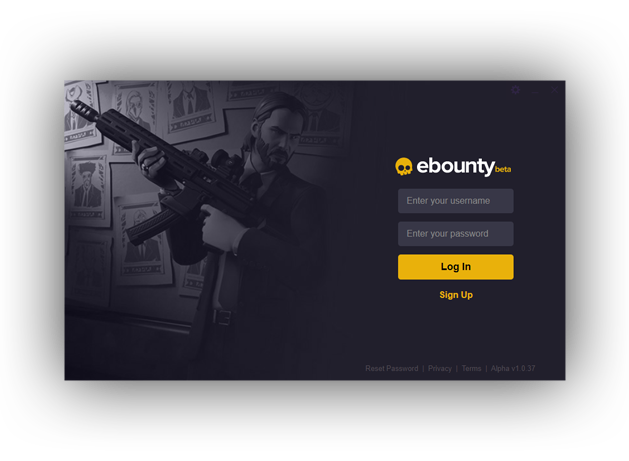 Think your're better than the most popular gamers online? Prove it by eliminating legendary bounties, leveling up, and increasing your rank on the leaderboards. 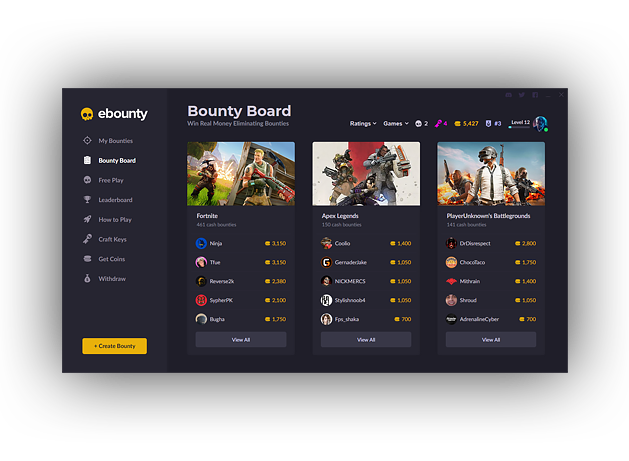 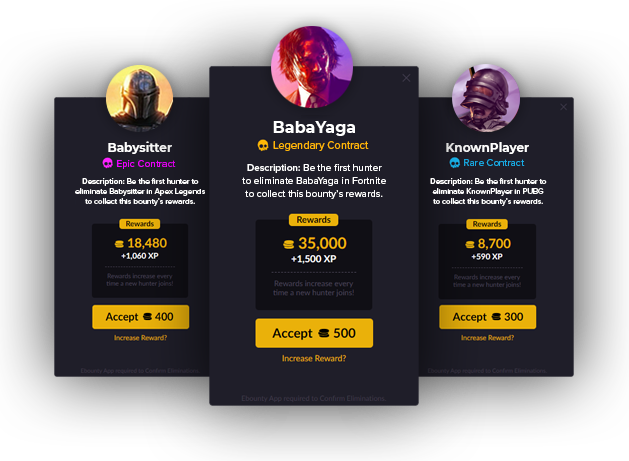 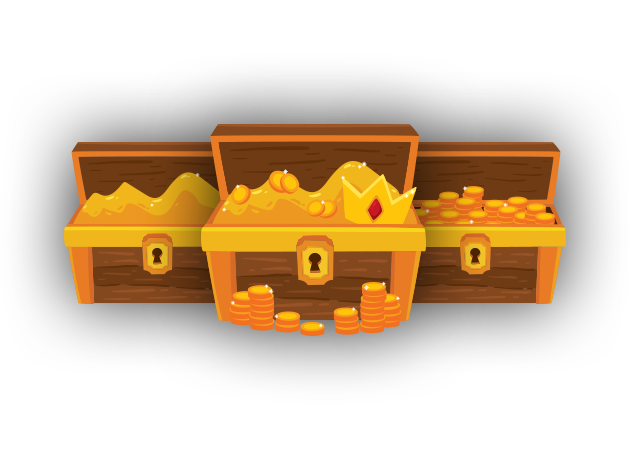 Be first to eliminate a bounty and you'll be rewarded with coins and XP. Then withdraw your cash winnings via PayPal or your bank of choice.
FAQ
Is Ebounty free?
Yes, Ebounty is free to sign-up, download, and use.
Do I need the Ebounty app running while playing games?
Yes, Ebounty uses a combination of APIs, Overwolf, and other technology -- which all needs to be running while you play to confirm eliminations.
What games are currently supported?
Ebounty works with Apex Legends, Fortnite, and PlayerUnknown's Battlegrounds.

How do I join a bounty contract?
Any user can join any contract by paying the one-time entry fee. Available contracts can be found on the Bounty Board.
How do I win?
Ebounty is a skill-based competition where the first hunter to eliminate a bounty wins.
Are there any pay-to-win microtransactions?
No. Ebounty was designed for the best players to prove their skill when competing against the pros with no pay-to-win microtransactions.
Can I still win a contract after another user collects the reward?
No, each bounty contract is unique. Once an elimination is confirmed, a new contract is automatically created with new rewards.
What are experience points?
Experience Points (XP) are gained by joining and winning contracts. XP is used to level up and rank up on the Leaderboards.
What are coins?
Coins are the virtual currency used by Ebounty which are required to join bounty contracts. Coins can also be redeemed for real cash rewards.
How do hunters get coins?
You can win coins by completing bounties or acquire coins at any time.
How can I redeem my coins?
You can withdraw your coins at any time using PayPal or your bank of choice.
What are skull keys?
Skull keys are the virtual currency used to join Free Play bounties. Unlike coins, keys cannot be redeemed for real cash rewards.
How do hunters get skull keys?
Keys can be crafted by using skulls that are awarded for eliminating players in games supported by Ebounty. Every kill awards one free key.
How are rewards calculated?
Every hunter who joins a bounty increases that bounty’s reward. The more hunters, the bigger the reward.
How are bounties rated?
Each bounty is given a rating based on statistics provided to the public by game-streaming platforms such as Twitch, Mixer, and YouTube.
Can I create my own bounty?
Yes. If there’s a bounty not currently listed on Ebounty, you can create your own and raise the reward for other users. However, as the creator, you cannot win your own custom bounty’s rewards.
Do bounty contracts have a time limit?
No, bounties with one or more hunters stay active until a hunter eliminates the bounty and claims the reward.
Is there a limit to how many bounties a hunter can join?
No, there are no time-gates or limitations on how many active bounties each hunter can join.
Rules
The Ebounty App is Required to Confirm Eliminations
Make sure you always start the Ebounty application and log in before you start playing a game. Any eliminations that occur without the Ebounty in-game overlay running will not be saved and will not count towards completing contracts.
Cheating and Exploits
Ebounty is intended to be a skill-based competition, cheating and exploits will not be tolerated. Hunters who cheat or use bugs/exploits and bounties who feed hunters will be disqualified from contracts with no refunds given. Multiple infractions will result in being permanently banned from using Ebounty’s services.
User Age
Ebounty users must be at least 18 years old (or such other age, if greater, as may be required in such player’s country of residence) in order to participate. Minors must have permission to participate from a parent or legal guardian. Users who provide false eligibility information will be subject to disciplinary action and banned from further use of the app.
Additional Legal Info
Please visit our Privacy Policy and Terms of Service pages for additional legal information regarding the use of Ebounty.